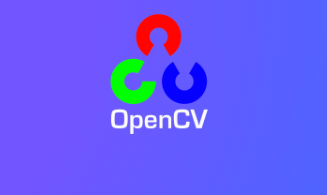 The name of OpenCV is Open Source Computer Vision Library, an open source computer vision library. As shown in the above figure, we see the OpenCV logo, which can be seen by three small rings of distinct R, G, and B primary colors. That is, it is a set of API libraries for open source code for computer vision.

(1) Whether it is scientific research or commercial application, it can be used for development;

(2) The source code of all API functions is public, you can see the program steps of its internal implementation;

(3) You can modify the source code of OpenCV and compile and generate the specific API functions you need.

Part of the image processing on Jetbot also uses some functions of OpenCV's library. If you are interested in the development of Opencv computer vision library and want to know more about it, here are a few websites for your reference study:

cv2.IMREAD_COLOR: Read the image in grayscale mode, which can be represented by 0;

cv2.IMREAD_GRAYSCALE,1:, read in a color picture, which can be represented by 1;

cv2.IMREAD_UNCHANGED: Read in an image and include its alpha channel, which can be represented by 2. 2, the image is saved:

3. Video stream read and save

Learn to read, display and save videos. The functions are cv2.VideoCapture() and cv2.VideoWrite();

Get the video stream from the camera:

The parameter 0 indicates the default camera of the device. When the device has multiple cameras, the parameter selection can be changed.

Read the video stream of the camera: ret, frame = cap.read()

No parameters, but need to be placed in an infinite loop to continuously read the video

No parameters, be sure to turn off the camera and release resources before the program closes.

In the Jetbot robot car camera driver camera.py, this function is used to obtain the video stream data of the camera.

Create a VideoWriter object and specify the output file name

Specify the use of the XVID encoder:

Text is the text to be written, point is the lower left coordinate of the first character, font is the font type, and size is the font size.

This function is particularly important when using the multi-AI model framework. Because if our application needs to use two different frameworks or models trained by different training methods, but we set the capture from the beginning of the camera. The image resolution is fixed, and the resolution of their model operations is inconsistent.

At this time, we can use the image scaling function of OpenCV to scale the image to the target resolution for AI operation.

The RGB color space, that is, the three primary color spaces, any one of which can be a mixture of the three colors. However, the effective processing of the image in the color space is generally performed in the HSV space. HSV (Hue, Saturation, Brightness Value) is a color space created according to the intuitive characteristics of the color, also called the hexagonal cone model. As shown below. 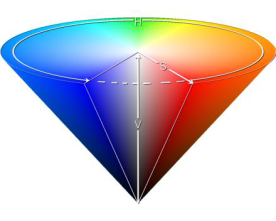 The value range of the HSV color space in OpenCV:

Range of commonly used colors, as shown below.