First, initialize the camera and display in real time. The image data we collected and its properties are consistent with the currently set camera display image.

Our neural network adopt 224 x 224 pixel images as input. So we set the camera to this size to minimize the file size and minimize the data set. (We have tested this pixel for this task.) In some cases, it is best to use a larger image size when collecting data, and then reduce it to the required size when processing. 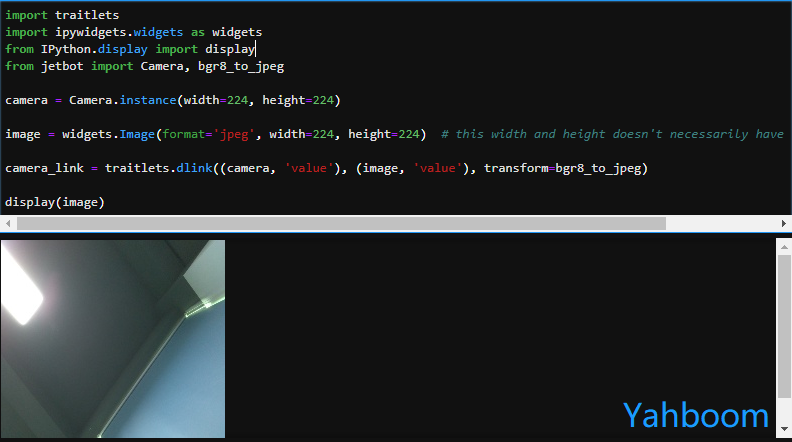 Then, we need to create some directories to store the data. We will create a folder called dataset with two sub-folders, which is free and blocked, for sorting the images of each scene.

If you are running the cell code at second time, the previously created data store folder already exists and you will be prompted with 'Directories not created becasue they already exist'

If you refresh the Jupyter file browser on the left, you can see that these directories appear.

Next, we need to create and display some buttons that will be used to save a snapshot for each class tag. We'll also add some text boxes that will display the number of images for each category we've collected so far.

This is useful because we want to make sure that we collect as many "free" images as "block" images. It also helps to understand how many images we have collected in total.

After running the above cell code, the following two buttons and counters are displayed:

But now these two buttons are still only displayed, no events have been bound, we have to attach a function to save the image for each category of button ' ' on_click ' ' event. We will save the value of ' ' Image ' ' (not the camera) because it is already in compressed JPEG format!

To make sure that no filenames are repeated (even on different machines!), we'll use the ' 'uiid' package in python, which defines the ' 'uiid1'' method to generate a unique identifier. This unique identifier is generated from information such as current time and machine address.

Now, the button above can already save the image to the "free" and "blocked" directories. You can view these files using the Jupyter left directory file browser!

Now continue to collect some data:

1. Place the robot in a scene where it is blocked and press "add blocked".

2. Place the robot in a free scene and press "add free".

(Reminder: You can move the widget to a new window by right-clicking the cell and clicking Create new View for Output.)

Here are some tips for tagging data:

It's important to get a variety of data (as described in the tips above), not just a lot of data, and you might need at least 100 images per class (this is not science, just a useful trick).

After running the cell code below, the image and button will be displayed and you can start collecting data: 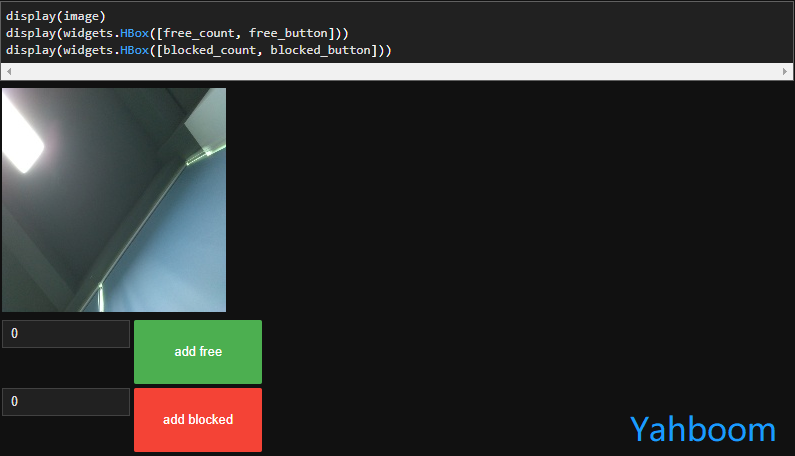 When collect enough data, we need to copy this data to our GPU platform for training, but our Jetbot is powerful enough that we don't have to wait too long for Jetbot training.

Here, we will train our image classifier to detect two classes 'free' and 'blocked', which we will use to avoid collisions.

First, we need to import the relevant libraries used by torch and torchvision:

We create an instance of the dataset using the ImageFolder dataset class in the torchvision.datasets library.

There is an additional torchvision.transforms library for converting data to prepare for the training model.

We divide the data set into a training set and a test set. The test set is used to help us verify the accuracy of the trained model:

Next, we need to create a data loader to load the data in bulk. The data loader is divided into two: one is the training data loader and the other is the test data loader:

Now, we define the neural network that will be trained.

The torchvision library provides a set of pre-trained models that we can use. In a process called migration learning, also called learning, we can reuse pre-trained models (training on millions of images) to get as little data as possible and to do as many tasks as possible. Important features learned in the original training of the pre-training model can be reused for new tasks.

We will replace the best layer with the latest, untrained layer with only two outputs.

Then, transfer the model from the CPU to the GPU via 'CUDA':

After running the above code, we can start the model training directly with the cell code below. 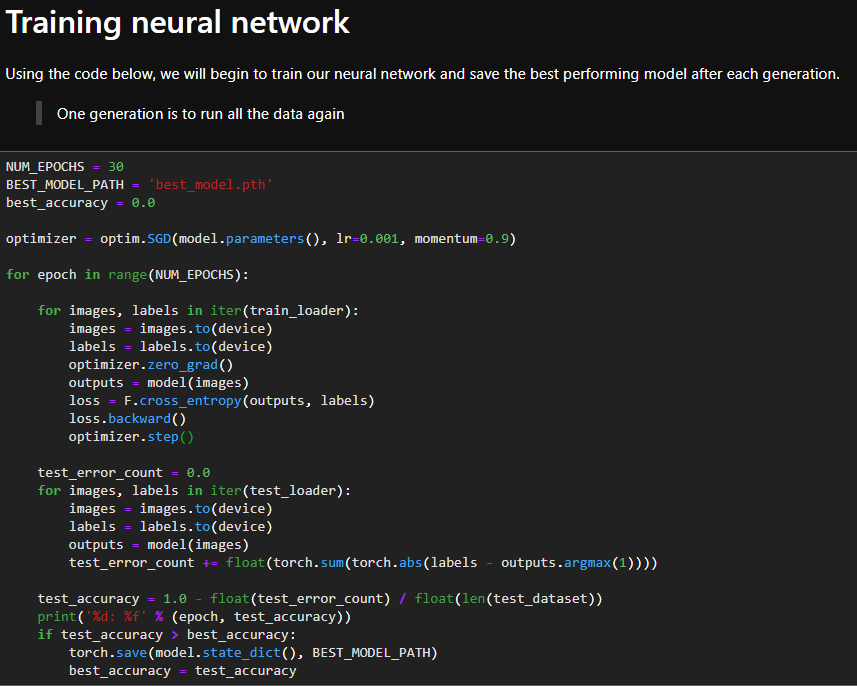 When the model is trained, we can see the model named best_model.th generated in the catalog. We will use this model for active obstacle avoidance in the next routine.

In the above two sections, we trained the data collected by the 'acquisition data' code by running the 'training model' to become the obstacle avoidance model we need.

Now, we will use this model step by step to realize the obstacle avoidance function.

Execute the following code to initialize the PyTorch model:

Then, we load the model we trained last time. If the model that we train is not ideal, it may be related to the number of data acquisition and the height and angle of the camera. Users can test directly using the trained model in the image provided by Yahboom.

After downloading, we also need to transfer the model weights from the CPU to the GPU operation via 'CUDA'.

Need to perform the following steps:

1. Convert from BGR to RGB mode

Run the following code to define the pre-processing features:

Once the preprocessing function is defined, the image can be converted from a camera format to a neural network input format.

We also need to create a slider that shows the probability that the robot is blocked:

Then,we need to create a function that calls the function whenever the value of the camera changes. This feature will perform the following steps:

3. When the neural network output indicates that we are blocked, we will turn left, otherwise we will move on. 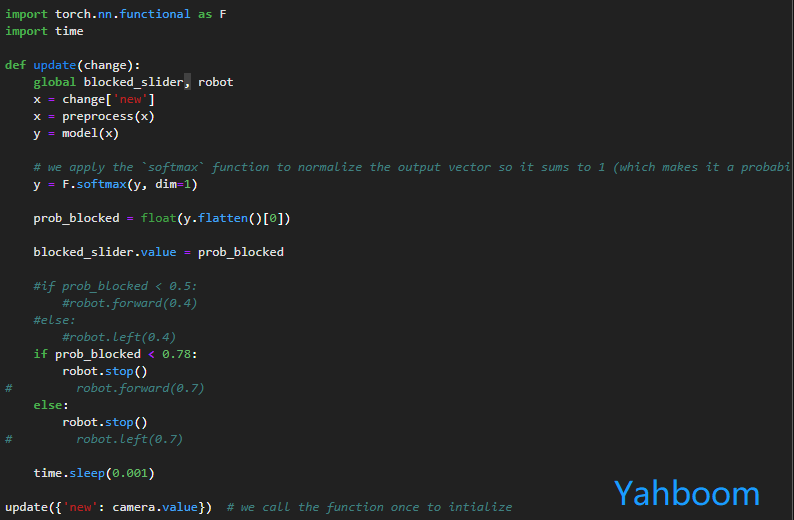 We have created a neural network execution function, but now we need to attach it to the camera for processing. We do this with the ``observe`` function.

Tips: The robot will start moving at this time! Make sure your Jetbot robot is in a movable area to avoid falling damage!!!

After running the above code block, Jetbot starts generating new commands for each detected picture.

First, we need to put the robot on the ground and observe its reaction when it encounters an obstacle.

If you want to stop performing autonomous obstacle avoidance, you can cancel by executing the following code.

Execute the code shown below, you can cancel the camera connection, just do not push the video data stream to the browser, but the Jetbot camera is still working.

If you need to re-display refresh, run the following code: