After completing all the previous experiments, you may acquire some basic understanding and knowledge about Arduino application. We have introduced digital input and output, analog input and PWM. Now, let's begin the learning of sensors applications.
Photo resistor (Photo varistor) is a resistor whose resistance varies from the different incident light strength. It's made based on the photoelectric effect of semiconductor. If the incident light is intense, its resistance reduces; if the incident light is weak, the resistance increases. Photovaristor is commonly applied in the measurement of light, light control and photovoltaic conversion (convert the change of light into the change of electricity).
Photo resistor is also widely applied to various light control circuit, such as light control and adjustment, optical switches, etc.We will start with a relatively simple experiment regarding to photo varistor application.
Photo varistor is an element that will change its resistance as light strength changes. So need to read the analog values. You can refer to the PWM experiment, replacing the potentiometer with photovaristor. When there is change in light strength, it will cause corresponding change on the LED. 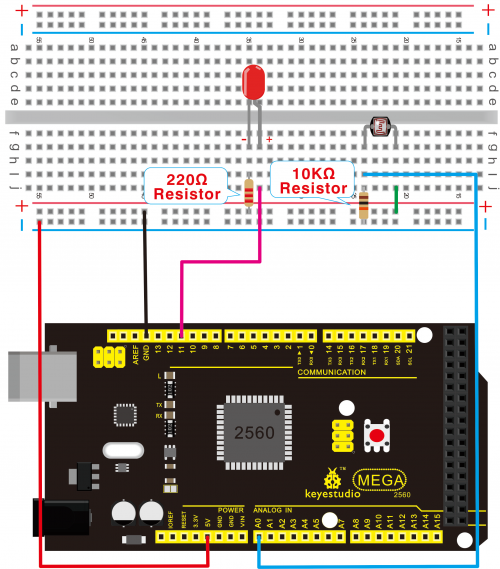 After the connection, let's begin the program compiling. The program is similar to the one of PWM.
For change detail, please refer to the sample program below.

After downloading the program, you can change the light strength around the photovaristor and see corresponding brightness change of the LED.
Photovaristors has various applications in our everyday life. You can make other interesting interactive projects based on this one.