This lesson learns to display custom image on a micro:bit dot matrix by Python programming. For example: boat.

1 - The capital letter / lowercase letters must be distinguished！

3 - Keywords such as # need a space between the content.

4 - The program ends with a blank program.

5 - The block body (such as the body of the while is marked by indentation), compared to the C language, Python completely eliminates the braces (along with the semicolon of the suffix), and uses the indentation structure to represent the relationship. You can only use the Tab key (tabulation key) for indentation.

1.You should open the Mu software, and enter the code in the edit window, ,as shown in Figure 3-1.

2.As shown in Figure 3-2, you need to click the Check button to check if our code has an error. If a line appears with a cursor or an underscore, the program indicating this line is wrong.

3.You need to connect the micro data cable to micro:bit and the computer, then click the Flash button to download the program to micro:bit as shown in Figure 3-3. 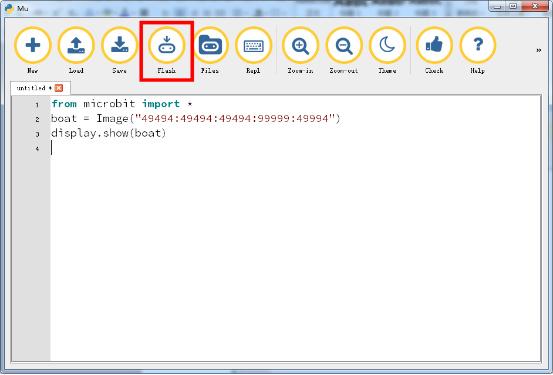 The code of the experiment: 3.Display custom image.rar